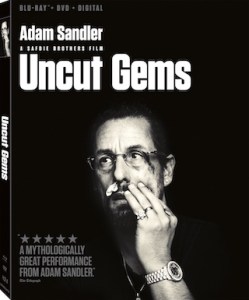 Adam Sandler gives “a mythologically great performance” (Robbie Collin, The Telegraph) in a critically-acclaimed thriller when Uncut Gems arrives on Digital February 25 from A24 and on Blu-ray™ Combo Pack (plus DVD and Digital) and DVD March 10 from Lionsgate. Co-written and directed by brothers Josh and Benny Safdie (writers and directors of Good Time), the film played at both the Telluride Film Festival and the Toronto International Film Festival to rave reviews and is Certified Fresh™ on Rotten Tomatoes. Uncut Gems stars Golden Globe® nominee Adam Sandler (2003, Best Performance by an Actor in a Motion Picture – Comedy or Musical, Punch-Drunk Love), LaKeith Stanfield, Kevin Garnett, Idina Menzel, Eric Bogosian, and Academy Award® nominee Judd Hirsch (1981, Best Actor in a Supportin\g Role, Ordinary People). Executive produced by Martin Scorsese, the Uncut Gems Blu-ray Combo Pack and DVD will be available for the suggested retail price of $39.99 and $29.95, respectively.

A charismatic jeweler (Adam Sandler) makes a high-stakes bet that could lead to the windfall of a lifetime. In a precarious high-wire act, he must balance business and family, fending off adversaries on all sides in pursuit of the ultimate win.

LaKeith Stanfield        Knives Out, The Girl in the Spider’s Web, TV’s “Atlanta”