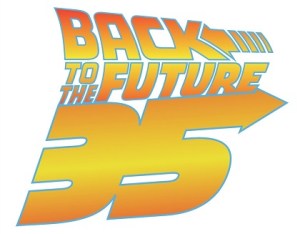 Now, take that all in and let’s look at a very, very informative Tweet from the folks over at Amblin Entertainment (Spielberg‘s production company). I’ll be first including the tweet itself and then loosey quoting from it for reference.

Over the next year, fans around the world will be treated to new, inspired-by merchandise across a variety of categories, books, toys, apparel, theatrical re-releases, anniversary celebrations, digital content and more (including a 4K release on UHD!)

Alright, that’s just pretty much a full confirmation that at least one film in the franchise or perhaps the entire trilogy is coming to 4K UHD Blu-ray in 2020. However, it says “a release” – meaning individually. For that reason you’re left with two obvious scenarios here: it will be the first (1985) film in the trilogy or it will be the entire trilogy as a box set. Here’s why I would think it could be the first film only and it’s because a lot of work sometimes goes into doing a full-scale 4K restoration of a film. I mean especially for a film as much of pop-culture and highly regarded as this. Now, that should be obvious and we would hope that would be the case that each film gets the proper treatment, but then again look how Universal did with another Amblin franchise “Jurassic Park” and rushed the entire series of films it had out (also a trilogy) to tie-in with an anniversary and the first reboot.

You have to think that they’d want to do these films and by that I mean the sequels the justice that they each really deserve. After all, the sequel (“Part II”) is what inspired the fan-created holiday that spawned this whole anniversary celebration, to begin with. The sequels hold up rather well for this trilogy. They all, as films though, continue to be released primarily in the trilogy form on home video for the past few decades too. So, I’m willing to bet you can actually expect the whole trilogy next year. Perhaps they won’t give the other two films full 4K restorations and instead just 4K scans and go back later and give them their anniversary edition re-releases with restorations when the time comes? Think about the future!

UPDATE: I just had a press release shared with me via the folks running the Back to the Future Twitter account that I’ll be happy to share with you all now, which confirms the whole trilogy is coming out next year. Just as I speculated at first as rumor and now I can tell you is 100% confirmed.

Here’s the press release and a direct quote confirming this:

Where we’re going, we don’t need roads… be on the lookout for theatrical events and the debut of the “Back to the Future” trilogy in 4K from Universal Pictures Home Entertainment, as well as a celebration from Turner Classic Movies (TCM) later in 2020.