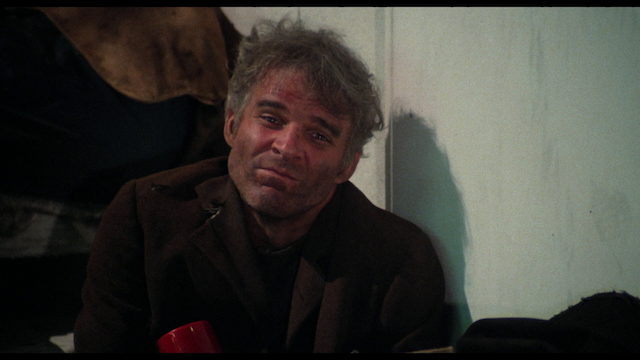 The story to this film was written by Steve Martin and Carl Gottlieb. Together the two co-wrote the screenplay to the film, along with help from Michael Elias. Gottlieb is best known for working on the screenplay adaptation of “Jaws” (1975), “Which Way Is Up?” (1977), and even this film’s TV movie sequel “The Jerk, Too” (1984).

Our protagonist here we first meet named “Navin Johnson” (Steve Martin) sitting in an alleyway drinking. He tells the audience that he’s “not a bum” that he’s “a jerk” and once had wealth, power, and the love of a beautiful woman. Now though, he only has two things: his friends (fellow bums) and… his thermos. He begins to tell you his story, being hard for him “born a poor black child” down in Mississippi. Turns out, much to Navin’s surprise that he was adopted, as his mother (Mabel King) finally breaks down and tells him on his birthday.

Navin says to his adopted mother that he just doesn’t feel like he belongs there. He laer has a bit of an epiphany that very same night when he hears a new type of music on the radio. That music inspires him to want to “be somebody” as he tells the family after he apologizes for dancing late at night and waking them all up. It’s not long after that when Navin tells his adopted family that he’s going to hitchhike his way to St. Louis (and beyond) to find what he’s looking for.

Along the way Navin will work a variety of jobs, first at a gas station attendant for a man named “Harry Hartounian” (Jackie Mason), and next at a carnival as a weight guesser where he meets a motorcycle riding female daredevil named “Patty” (Catlin Adams). It’s Patty who helps guide Navin a tad bit on his way by making him find out what his special purpose is for. Navin moves his way up at the carnival from weight guesser to working with trains where he meets a woman named “Marie” (Bernadette Peters) looking for a lost boy. When Navin finds the boy he asks her for a reward, and let’s just say the two end up seeing one another again – striking up a bit of a relationship.

If I discussed this film really any further for those few who have never seen it I feel I would be dishing out some potential “spoilers” and I don’t want to do that. That said, rest assured this is one hilarious comedy that doesn’t even begin to take itself seriously in the slightest bit. Comedy legends Steve Martin and Carl Reiner teamed up and in 1979 they brought us this comedic gem, now celebrating its 40th anniversary with a new Blu-ray release. 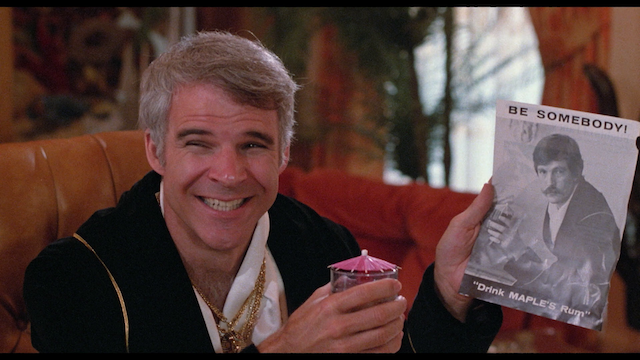 According to the technical specifications listed on IMDb this was shot on 35MM film using Panavision and Panaflex cameras. “The Jerk” is presented in the 1.85:1 aspect ratio, as it was originally shown theatrically. The movie has received a remastered new 2K transfer, different than that found on the previous (original) 2013 Blu-ray release.

This new transfer comes with a pretty solid black level, and a very nicely preserved amount of film grain visible throughout. It’s not as rough and as dark as before on the previous Blu-ray, and most importantly it comes with a good amount of detail. The color timing has been just ever so slightly corrected, and as a result brings a bit more accurate representation of flesh tones. This new transfer also comes with nice vibrant colors, at sometimes more than others, in comparison to the previously released Blu-ray. Colors like red really stand out nicely here.

It’s not a huge visual change but it comes across as a bit more solid and at times impressive, with film grain left intact. Keep in mind that it was not a full restoration effort here, just a new remastered scan of the camera negatives. To a fan of this film, I find it to be enough of an improvement in terms of high definition presentation. That said, I feel any fan should want to get the newer Blu-ray here. I’m impressed by this effort on the new 2K scan, and I do feel that it does this comedy classic justice – on its 40th anniversary. Job well done by the folks at Shout! Factory on this latest addition to their Shout Select label. 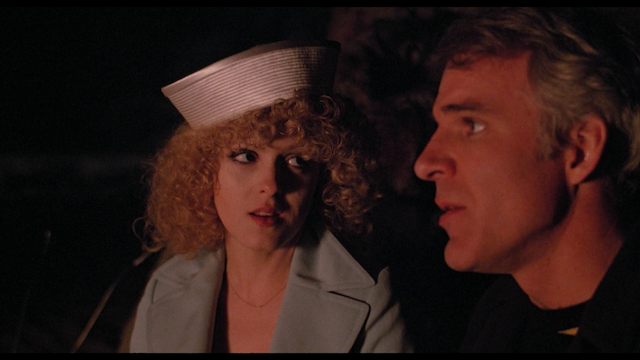 Audio here is presented in both DTS-HD 5.1 Master Audio and DTS-HD Master Audio 2.0 Stereo. It is worth noting that IMDb states this film originally only received a Mono sound mix during its theatrical release back in 1979. This is not the first time that the film has been presented in a 5.1 lossless mix either, as the previous 2013 Blu-ray release contained one as well. It is the first time however that we get a lossless Stereo mix. I’ll first focus on the 5.1 lossless mix.

Admittedly there is not really a huge amount of rear channel action to be found here, especially during the first opening scenes of the film. It’s finally used for the sound of crickets and other insects in the background in the Johnson home. Later the rear channels get used a tad bit for some music, but only lightly. It’s to be expected for a 1979 comedy that comes from a Mono sound source. Let’s face it. Still, it has its moments where it can take advantage of the rear channels a little more. Later background noises from cars passing on a nearby road at the gas station make pretty decent use of the rear channels.

Dialogue is delivered distinctly from the center channel speaker in this 5.1 lossless mix, and most of the sound effects and music are delivered from the left and right front channel speakers. Again, not much intense action to be heard in the rear channels on this surround mix, but it helps build a nice soundscape with its ever so faint use. There’s not a whole lot of bass (roaring or even humming) from the subwoofer here in the opening of the film until 8 minutes or so in after “Navin” turns the radio up loud to music. It translates into some pretty decent bass.

Scenes at the gas station later on include some pretty nice use of the subwoofer for the bass of sound effects and the film’s original music. Later on about the 50 minutes mark you’ll hear the rear channel speakers being lightly used for the sound of the waves at the beach. It’s ever so faint, but effective. A couple minutes later in a scene you’ll hear passing cars again ever so faint but effective in panning across the rear channels.

The lossless 5.1 surround mix is cool and all, but it feels a bit similar to the one on the previous Blu-ray. It’s a tad bit more than solid, but that’s not the lossless mix that impressed me. The Stereo mix is my personal favorite, and proves to be pretty awesome. This is the best I’ve ever heard this film, similar to how it was presented in its original theatrical showings. I really have to say I like what they’ve done here by including the Stereo lossless mix. This in terms of audio quality should leave fans pleased and/or impressed. Put me down for impressed, as my rating shows below. 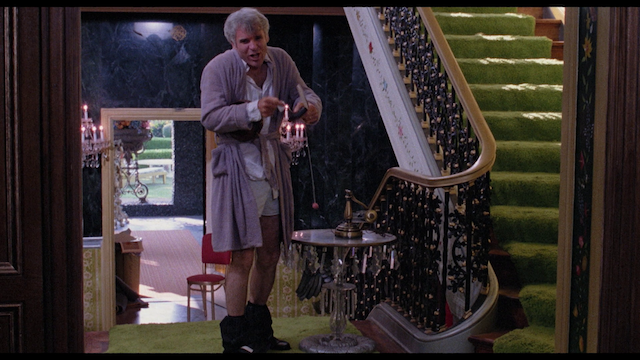 Bonus materials on this release are presented in HD video with DTS-HD 2.0 Master Audio Stereo sound – unless otherwise noted below. They include the following:

Overall the bonus materials on this “40th Anniversary Edition” Blu-ray prove to be worthwhile with almost an hour of new interviews and then all of the original promotional materials and DVD extras ported over. The real highlights here are the newly conducted interviews with Steve Martin & Carl Reiner as well as the one with the film’s co-writers. Fans are going to be really enjoying this good set of bonus materials. 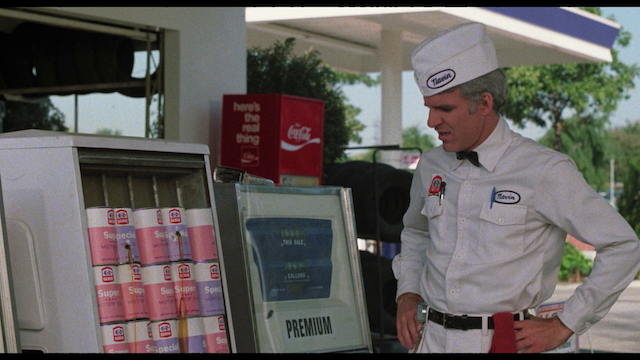 “The Jerk” is easily one of my top five favorite comedies of all-time. It’s unapologetically silly as hell, and that’s what makes it so funny. It also helps if you liked Steve Martin’s original stand-up comedy and such, or just silly things in general. There really truly is an unforgettably absurd love story here between “Navin” (Martin) and “Marie” (Bernadette Peters). The Jerk features some great performances here in supporting roles from folks such as Mabel King, Catlin Adams, Richard Ward, M. Emmet Walsh, and Jackie Mason.

This “40th Anniversary Edition” Blu-ray release comes with a new video transfer and lossless audio mixes that do this comedy classic the justice that it deserves. The new almost hour long amount of bonus materials, in addition to the archival extras, prove to all be worthwhile and adds so much more, finally.