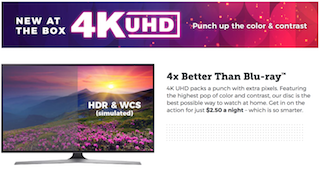 Kiosk rental giant Redbox has started renting 4K UHD Blu-ray titles in six different “test markets” around the United States. This news comes via Variety as well as the company’s official page. There are only four titles available so far in 4K to rent and are just $2.50 a night. Those films include “Black Panther” , “The Martian“, “The Commuter” , and “The Matrix” – for now. More titles in the coming weeks and month are planned.

The six test markets are as follows:

More information can be found on Redbox’s 4K rental page.