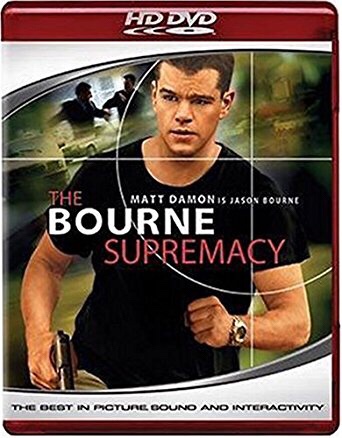 The basic plot to The Bourne Supremacy is very similar to The Bourne Identity in that Jason Bourne is still trying to evade any and all forces that seemingly will stop at nothing to kill this man. Naturally though, Bourne can’t just evade these forces in a normal manner, but he has to evade these forces using his explosive martial arts and wit. As we learned in Identity, Bourne had his memory wiped. To escape people, Bourne has traveled halfway across the world living on the beach of Goa in southern India. Everything is going fine for Bourne and his new girlfriend Marie until Bourne, who seems to notice every little detail, recognizes something he has never seen before driving a car he has never seen before turning up in all the wrong places at the wrong times. This prompts Bourne to realize that someone is after him again, which turns out to be definitely true.

As the movie continues onward, Bourne discovers that he is being pursued by new people named Pamela Landy (Joan Allen) and her boss Ward Abbott (Brian Cox). Both found Bourne’s fingerprints at the scene of a murder in Berlin involving a CIA agent and his high-level criminal contact. The only issue with this is that Bourne was in Goa at the time sitting on the beach. So the big question here who is trying to frame Bourne and, more importantly, why is someone trying to frame Bourne. This simple question leads Bourne through many locales while he tries to figure every little clue out.

One of the strongest points of the Bourne series thus far, are the extravagant locales the film’s use. In Supremacy, Bourne travels to Germany, Russia, India and Italy simply trying to escape these forces. Naturally though, we must get a lot of intense moments like a fight in a house in Munich and a chase through the streets of Moscow (which was, I might add, one of the most impressive scenes, despite a lot of criticism, in a thriller in quite sometime). The part that is interesting to me is that Bourne never worries about being caught as he strolls from place to place in the same attire never worrying about covering up his look. I suppose this is because he knows he can probably kill any type of force that tries to stop him.

The two films that has so far been created are based on the best selling novels by the excellent Robert Ludlum. A majority of his mystery type novels have enthralled readers for quite sometime. The characters he presents in all of his novels, particular the Bourne novels, are perfect for an actor like Matt Damon who brings Bourne to the screen with a subtle tone of intensity and ferociousness. Bourne is his quiet self when he is alone with his girlfriend toward the opening, but can become an immediate super psycho guy in a matter of seconds. Damon is able to convey all of these emotions that are necessary for a man who had lost his mind at one point in his life.

The only real sign of weakness in this film, and this is myself kind of stretching this a bit, is the ending car chase sequence where Bourne avoids accident after accident driving like he was a pro NASCAR driver. I suppose that if Bourne where to die like someone normally would, this wouldn’t be a Hollywood film now would it be? Bourne causes numerous people to crash, and assuming the law of psychics, and die. Is this the price that must be paid for a man like Bourne to continue surviving? The final scene where Bourne is giving an apology is heartfelt and meaningful. It makes me wonder if Bourne ever returns to Berlin how will be able to apologize to hundreds of people?

While I kind of stretched to find a problem with the ending sequence, The Bourne Supremacy is still a very effective thriller full of exciting action sequences, exotic locales, and top notch acting from Damon, Cox, and Allen. Paul Greengrass, recent director of the extremely heartfelt United 93, has an interesting way of gathering Bourne’s emotions in the final scene all while presenting Bourne as a man who wants the truth (this reminds me of Richard Kimble in The Fugitive in that Kimble simply wanted the truth behind why he was being framed). I’m hoping that Greengrass will return for The Bourne Ultimatum.

For the HD-DVD release of The Bourne Supremacy, Universal had improved on the picture quality deleting almost any previously noticeable grain or dirt. The aforementioned grain, dirt, and problematic color tones in the DVD release, are nearly gone (there is still a little bit of grain here and there). Pixelation is completely absent, which was mostly noticeable in the final chase sequence. This is a definite pleasure as the viewer can enjoy this edge of your seat chase sequence just that much more. Colors are top notch with the dark darks of the Moscow locale being displayed in prime effort. The overall tone to the film, which seems gritty, is spot on and smooth while flesh tones are perfect. The fun thing, I’ve noticed at least, to do with HD-DVD is to compare both the DVD and the HD-DVD release side by side to simply see how much HD-DVD improves on the overall image quality. Items like license plates, warning signs, etc are easily clearer this time around giving the viewer that much more realistic approach to the film.

The explosiveness of The Bourne Supremacy comes alive in full swing thanks to the use of the Dolby Digital Plus 5.1 Audio Track. Dialogue, as usual, is clear. The overall sound dynamics, from screeching tires, crunching glass, blasting bullets and whirling police sirens, are excellent. The overly energetic score on behalf of John Powell is amazing. Powell’s score gives the film the necessary tension, power and intensity. After viewing a few action films here and there, I can easily say that The Bourne Supremacy is one of the more impressive video/audio efforts to arrive from Universal.

The HD-DVD release of Supremacy is top notch in nearly all departments. The features, especially the new “Bourne Instant Access”, earn immediate top scores from me as this is the way features need to be if HD-DVD’s expect to gather a following. The video is improved on all levels, but more importantly the audio is reference material as far as HD-DVD releases are concerned. As far as the film is concerned, I stretched myself to find a fault in the film, but the fault is more of a personal item instead of a real fault. This release, even if it contained nothing new, comes very recommend as The Bourne Supremacy is a fine action thriller.